On November 24th, 2015, the FDA mandated that the manufacturers of Taxotere inform users on its warning labels and package inserts of the potential side effect of permanent alopecia. 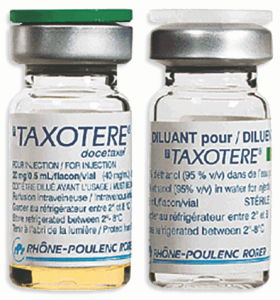 Taxotere is the brand name of the drug docetaxel, which is also sometimes sold under the name Docefrez. It is in the drug class known as “taxanes” and is administered intravenously in chemotherapy and various cancer treatments. Most commonly, it is used to treat breast cancer, but it can also be used against head/neck cancer, stomach cancer, prostate cancer, and (non-small cell) lung cancer. Taxotere is designed to stop cancer in its tracks by preventing cancer cells from growing and spreading.
While Taxotere can have beneficial effects, it also has a host of negative side effects. Most recently, as mentioned above, the FDA has mandated the risk of permanent alopecia (hair loss) be added to the list. Other possible side effects of taking Taxotere include:

About the Taxotere Lawsuit

The Taxotere lawsuit is filed against Sanofi-Aventis, the drug’s manufacturer. It is based on the failure of that company to properly warn doctors and patients of the high risk of permanent alopecia for those who use the drug during chemotherapy.
The lawsuit states that, had Sanofi-Aventis printed a warning concerning permanent alopecia on their product labels, patients would most likely have been given a different drug called “Taxol.” Taxol is considered by many to be even more effective than Taxotere in its positive effects but lacks the negative side effect of permanent hair loss.

Ron Laba is an experienced personal injury attorney taking up cases of those who have needlessly suffered the side effect of permanent alopecia after being prescribed Taxotere. If you are in this group and would like to join a class action lawsuit, or otherwise pursue damages against the manufacturer of Taxotere, do not hesitate to contact the Law Offices of Ronald B. Laba today by calling 844-439-8869.

Ron Laba knows the law and knows how to win in the courtroom. He will fight to secure for you your maximum claim if you have been harmed in any way through the negligence of others. Do not assume you can’t win against the big drug companies—Ronald B. Laba has disproved that myth again and again by winning full compensation for victims of all kinds.

Q: What is Taxotere®?
A: Taxotere® is the brand name of the drug docetaxel, which is also sometimes sold under the name Docefrez®. It is in the drug class known as “taxanes” and is administered intravenously in chemotherapy and various cancer treatments. It is a semi synthetic drug which causes increased molecular activity at the cellular level. Most commonly, it is used to treat breast cancer.

Q: What is the problem with Taxotere®?
A: In short, this drug has been linked to permanent disfiguring hair loss or baldness in women who received it during chemo-therapy treatment for breast cancer.

Q: What is the theory of the case?
A: In essence, our contention is that the manufacturer of Taxotere® materially misrepresented the facts about its product and failed to warn patients and physicians of the significantly increased risk of permanent alopecia (loss of hair) through use of Taxotere® during chemotherapy. If the manufacturer had properly warned of the known risks, patients would have been prescribed a different chemotherapy drug called Taxol®, which is more effective than Taxotere®, and does not result in permanent hair loss. Inexplicably, as early as 2006 the manufacturer provided warnings of permanent hair loss to its customers in Europe and Canada – but not to women or their physicians in the United States!

Q: Was there an alternative chemo-therapy treatment that could have been used instead of Taxotere®?
A: Yes, there was – Taxol®. Taxol® is a non-synthetic drug which entered the market place before Taxotere® and remains on the market today. Taxol® has long been shown to be just as, or even more, effective and better tolerated than Taxotere®. However, Taxol® does not result in the patient experiencing permanent hair loss. Had the manufacturer of Taxotere® properly disclosed that its product significantly increased the risk of permanent hair loss, we believe most physicians and patients would have chosen Taxol® instead of Taxotere® as their preferred treatment.

Q: Who is this case against?
A: This is a case against the manufacturers of Taxotere® – a company called Sanofi -Aventis. Sanofi – Aventis is a French company and one of the largest pharmaceutical manufacturers in the world. Last year it reported revenues of over 36 billion dollars.

Q: Is my Doctor or Hospital going to be brought into the case?
A: No, this is not a case against any doctors, hospitals, pharmacies or any other health care provider. We believe fault lies solely with the manufacturer of the product (Sanofi-Aventis).

Q: Will I owe any fees or costs if I don’t win my case?
A: No, if you don’t win, you don’t pay. We only get paid if we successfully settle your case for an amount approved by you in writing in advance. Thus, if we take your case, you can have a peace of mind knowing that we have a reasonable expectation of success.

Q: Is this a class action case?
No. We do not favor class actions for our injured clients. A class action is essentially a large group of plaintiffs, known collectively as “the class”. The class is represented by a class representative, who stands for the rest of the class. This means that all members of the class are treated as one plaintiff, not separately.

Instead, we file cases individually or in a “mass tort” action. Clients still achieve strength in numbers by joining together against a common defendant but they do not lose their right to be treated as individuals. This is important because every case is different and each person’s own set of facts and circumstances needs to be taken into account in order to understand the true nature and extent of their damages. We believe this kind of approach is necessary in order to achieve maximum payment on the case.

Q: Who can I call if I would like more information?
A: Feel free to call us at 1-800-490-2222. Our job is to make sure all of your questions are answered fully and completely.